‘We live like animals,’ say villagers displaced by fighting in Central African Republic 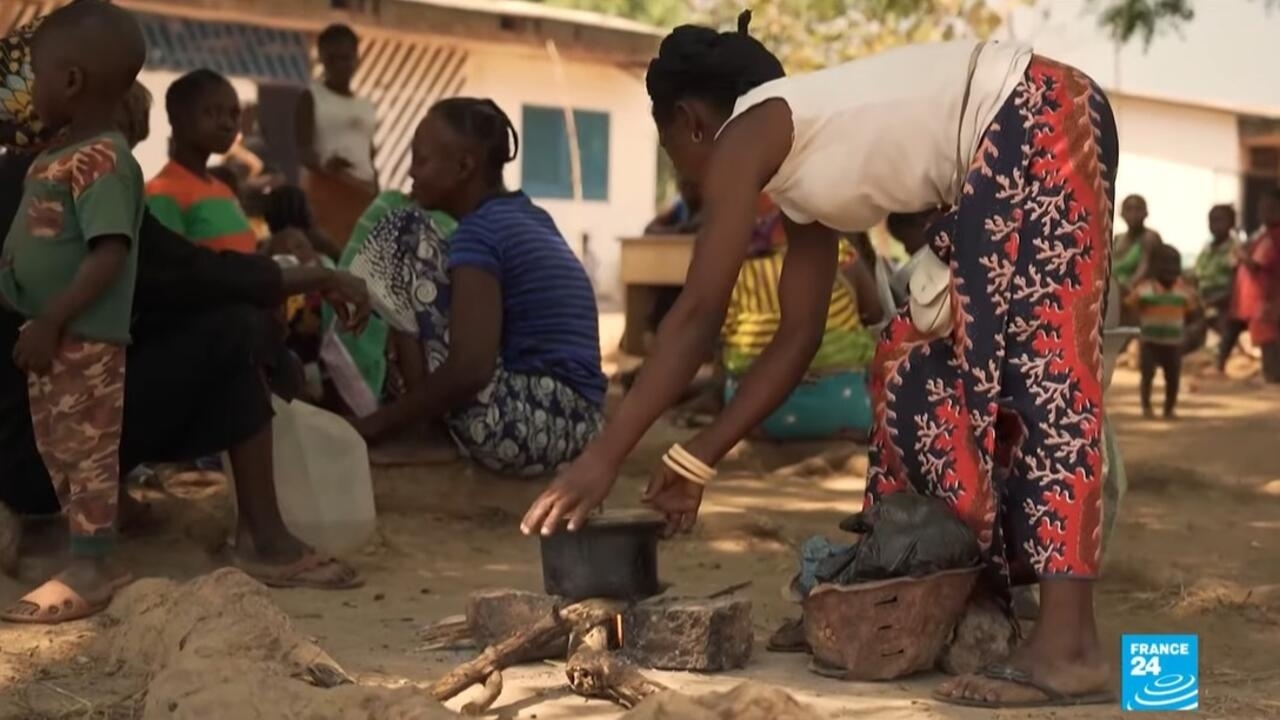 Fighting between pro-government forces and rebel groups in the Central African Republic have forced thousands of families to flee their homes. Living in precarious conditions in a schoolyard on the outskirts of the capital, Bangui, displaced villagers tell FRANCE 24 their situation is dire as aid groups warn of dwindling humanitarian stocks.

Under the shade of a tree in a schoolyard on the outskirts of Bangui, the capital of the Central African Republic, around 2,500 displaced villagers gather with a few possessions – plastic buckets, a few mats and cooking pots.

Three weeks ago, the villagers fled heavy fighting between pro-government forces and rebel groups as the security situation in this impoverished African nation deteriorated.

Eric Biro, the chief of the village of Bondokpo, which came under attack, is desperate and does not mince his words. “We live like animals, because we left without our luggage, or even mats to sit on. There are still a lot of deaths there now,” he explains pointing in the direction of his abandoned village. “Many casualties…corpses are all over the forest,” he adds, his voice trailing off in despair.

Fighting erupted again last year just as the Central African Republic was gearing up for the December 27 presidential election, when six of the country’s most powerful armed groups formed an alliance against the government of President Faustin Archange Touadera.

The gold- and diamond-rich country of nearly 5 million people has failed to find stability since a 2013 rebellion ousted former president François Bozize.

Although Touadera won the first round of elections, the country’s political opposition has dismissed the victory as a sham.

Meanwhile the rebels have been trying to cut off the capital from the rest of the country, attacking villages along the route.

‘What are we going to eat?’

For Biro and his fellow villagers from the area, the situation is dire. Over the past three weeks they have relied on meagre aid deliveries from the few humanitarian organisations operating in the country.

But their rations for a month are barely enough to survive.

“It’s not a lot. I have five children,” explains Mbaz Mapoumka. “But with just that, what can we do? In a week, that will be over, and what are we going to eat?”

Aid groups warn of shortages due to road blockages caused by the conflict. Food prices have already tripled in the country.

“Food and humanitarian stocks are dwindling day by day. We have enough to last a few weeks or even a few months, but if the situation does not improve very quickly, it will be extremely critical for the population,” explained Tom Peyre-Costa, regional spokesperson for the Norwegian Refugee Council (NRC)

Across the Central African Republic, more than 240,000 people have been forced from their homes since rebels launched attacks in mid-December and around 2 million people in the country are believed to a have already been food insecure.