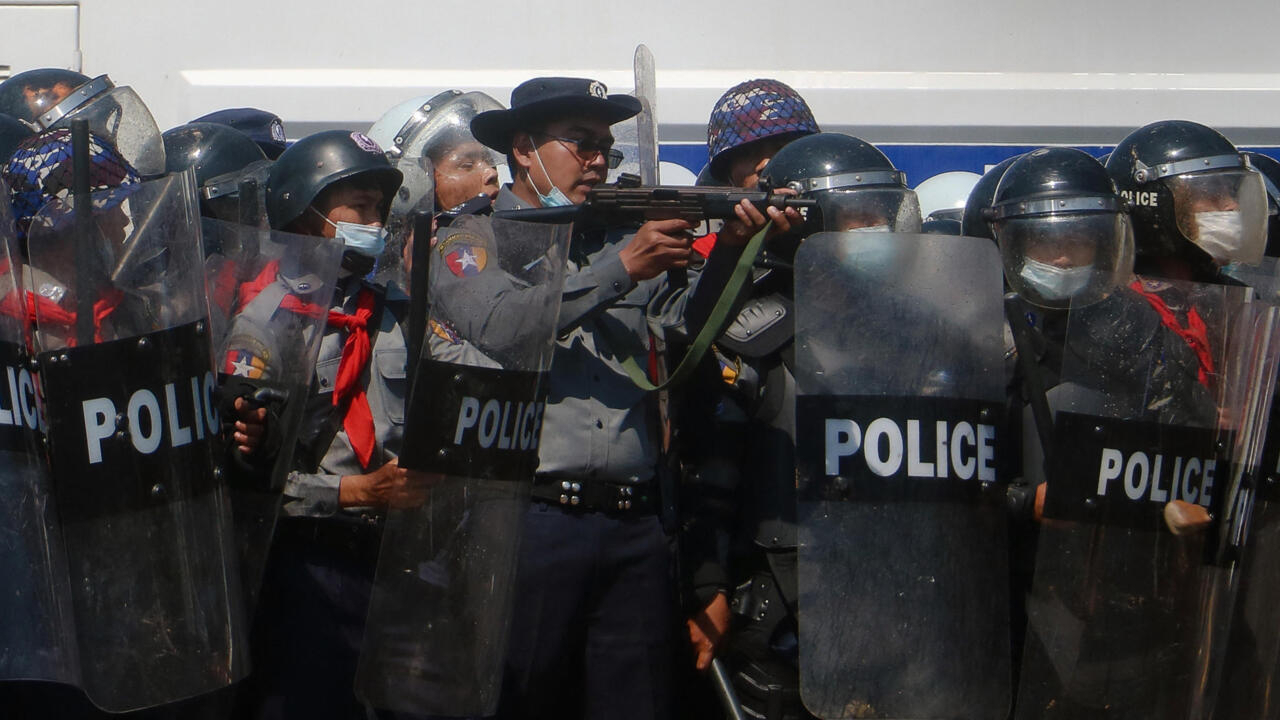 The latest assault on Myanmar’s civilian leadership came as anger at last week’s coup and the detention of Suu Kyi by the generals has driven hundreds of thousands of people into the streets in recent days, defying a junta ban on rallies.

“The military dictator raided and destroyed NLD headquarters at around 9:30pm,” the National League for Democracy announced on its Facebook page.

The raid came after demonstrations erupted for a fourth straight day Tuesday, with police using water cannons in several cities, firing rubber bullets at protesters in the capital Naypyidaw and deploying tear gas in Mandalay.

The rallies came despite a warning from the junta that it would take action against demonstrations that threatened “stability”, and a new ban on gatherings of more than five people.

In Naypyidaw, the remote capital purpose-built by the previous military regime, witnesses said police fired projectiles at protesters after earlier blasting them with water cannon.

“They fired warning shots to the sky two times, then they fired (at protesters) with rubber bullets,” a resident told AFP.

At least one emergency room doctor said the military were also using live rounds, leaving a 23-year-old man and 19-year-old in a critical condition in hospital.

“We believe they are actual bullets because of the wounds and their injuries,” the doctor said.

“We don’t operate on their wounds because they could die right away — we are 100 percent sure they will die if we operate — that’s why we are watching their condition by treating them medically.”

The father of one of the victims said his son had been shot “when he tried to use the megaphone to ask people to protest peacefully after the police used water cannon to disperse them.”

“He got hit in the back… I’m very worried about him,” the 56-year-old goldsmith told AFP.

A witness, who declined to be named out of fear of the authorities, said she gave shelter to about 20 of the protesters, offering them water, towels and fresh face masks.

As night fell the United Nations voiced its “strong concern” over the violence.

“The use of disproportionate force against demonstrators is unacceptable,” said Ola Almgren, the UN resident coordinator and humanitarian coordinator in Myanmar.

‘We only have one life’

The army also announced a curfew and a ban on protest gatherings.

But on Tuesday fresh demonstrations emerged in Yangon, including near the NLD’s headquarters.

The protesters carried placards, some of which read “We want our leader”, in reference to Suu Kyi and “No dictatorship”.

By afternoon, thousands had gathered in neighbouring Kamayut township, carrying umbrellas and wearing raincoats as they faced off against police, who had water cannon trucks blocking protesters from marching ahead.

“Of course we are worried (about a crackdown),” said protester Khin Thida Nyein, a teacher. “We only have one life but we still come out…. as we are more concerned for the future of our children.”

Protesters dispersed by nightfall, with no reports of clashes with Yangon authorities.

It will also hit the military government’s coffers, which are set to lose overflight fees paid by airlines that could be worth up to $182,000 per day.

“Without us they can’t get the money anymore,” one air traffic controller told AFP.

The NLD won last November’s national elections by a landslide but the military never accepted the results.

It has announced a one-year state of emergency and promised to hold fresh elections after that.

Min Aung Hlaing on Monday insisted the military would abide by its promises and reinstall democracy. He also declared that things would be different from the army’s previous 49-year reign, which ended in 2011.

The United States has led global calls for the generals to relinquish power, and issued a fresh statement on Monday, using the country’s former name as it said it stands “with the people of Burma.”

The UN Human Rights Council said it would hold a relatively rare special session on Friday to discuss the crisis.

Meanwhile, relatives of an Australian economic advisor to Suu Kyi said they were “distraught” over his detention.

Australian Foreign Minister Marise Payne has summoned the Myanmar ambassador over the case.

In the ‘battle for the soul’ of a nation, Joe Biden offers an antidote to Trump

US state capitals largely quiet after bracing for violent protests