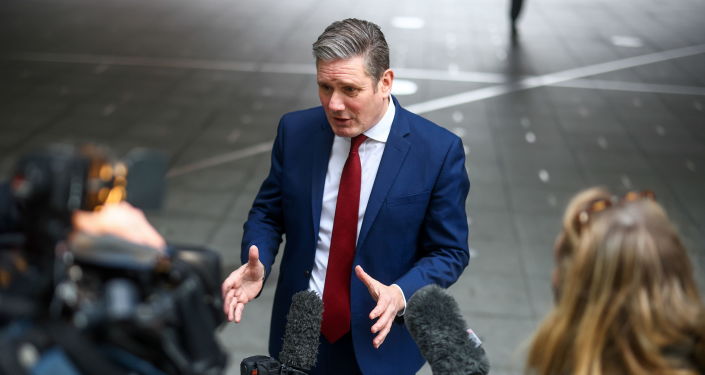 UK Labour Party leader, Sir Keir Starmer, will on Saturday declare himself “pro-American” in an effort to close the party’s chapter once and for all on the Jeremy Corbyn era.

According to The Independent, in an event at The Fabian Society on Saturday January 16, Mr Starmer will brand himself “pro-American but anti-Trump” and will attempt to cast a post-Brexit Britain under his possible leadership as a “bridge between the US and the rest of Europe.”

Starmer’s comments come as part of a broader effort under his leadership to mark a decisive break from the tenure of his predecessor, Jeremy Corbyn, who had a look history of criticising American and broader Western foreign policy, particularly in the Middle East and Latin America. During his time as Labour leader, from September 2015-April 2020, Mr Corbyn was criticised over his views by a number of MPs within both the governing Conservative Party as well as Labour, with many questioning whether he could be entrusted to safeguard the UK’s so-called special relationship with the US.

Sir Keir Starmer will be attempting to erase such concerns just days before the inauguration of President-elect Joe Biden on January 20th by declaring during his speech that he is “incredibly optimistic about the new relationship we [the UK and the US] can build.” Sir Keir will reportedly add that he believes in all dimensions of the UK-US relationship, including “a strong future together, on everything from security, climate change, aid and trade.”

According to The Independent, Sir Keir will declare that, “this isn’t a normal transition of power from one president to another. The pictures on our TVs in the last few weeks make that clear. The US is more divided than at any time I can remember. Amid all that, this is a moment of huge optimism, of hope winning out over hate. And it can also be a turning point. Not just in America but also for Britain’s relationship with the US and for global politics.”

Yet, Sir Keir will go further than simply outlining his roadmap for future relations with the US as he sets his sights on No.10 Downing Street in the upcoming 2024 general election. He will also snipe at incumbent Prime Minister Boris Johnson over his apparently close relationship with outgoing US president, Donald Trump. Mr Johnson, Sir Keir will reportedly say, has spent too long “cosying up to people who don’t have Britain’s interests at heart and courting the idea that he is Britain’s Trump.”

Singing from the triumphalist hymn sheet, Sir Keir will also proclaim that Britain is a “moral force for good in the world” – in what many are likely to see as a return to the rhetoric of the days of Labour’s former staunchly internationalist leader, Tony Blair – and will slam the Conservative Party that has been in government since 2010 for “overseeing a decade of global retreat.” He willl go on to claim that under his leadership, should be win in the 2024 elections, that Britain will “rebuild” its economy and “lead the world again.”

On the matter of the UK’s recent departure from the European Union, Sir Keir has previously said that he will not seek to return to the issue of a second Brexit referendum, nor will he try to revise the terms of the UK’s departure from the bloc. Moreover, he recently scrapped his previous pledge to reintroduce freedom of movement if Labour wins in the 2024 general election. However, in his speech on Saturday, he will say that London and Brussels should maintain a “close economic relationship,” potentially signifying an intention to consider a closer partnership than the one negotiated recently under Boris Johnson’s government.