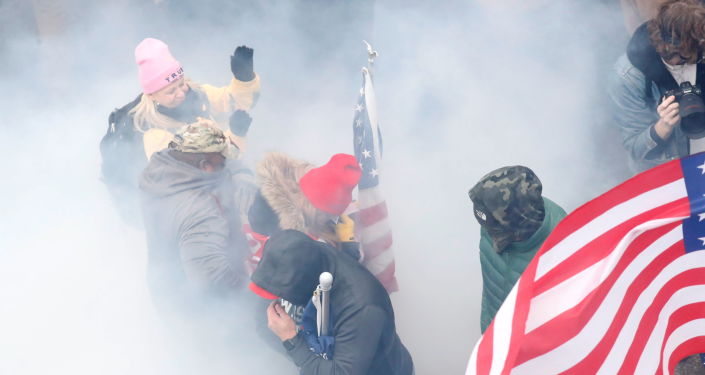 US federal prosecutors revealed in a new court filing against Jacob Chansley, a Capitol rioter known as the “QAnon Shaman,” that the mob that staged the violent insurrection last week planned to “capture and assassinate elected officials.”

In describing the threat posed by the defendant, the filing notes that “strong evidence, including Chansley’s own words and actions at the Capitol, supports that the intent of the Capitol rioters was to capture and assassinate elected officials in the United States Government.”

The recent court filing is the latest and most alarming claim from law enforcement officials addressing the threat posed by the rioters.

Chansley, who also goes by the name “Jake Angeli,” is widely associated with face paint and a horns-and-fur costume he wore during the Capitol attack. He gained nationwide attention with the costume as photos captured him walking throughout the Capitol grounds and standing on the US Senate dais, as US Vice President Mike Pence presided over the joint congressional session to certify US President-elect Joe Biden’s election win.

The memo itself was filed by prosecutors late Thursday as part of officials’ argument against releasing Chansley while his case remains active.

“Chansley is an active participant in – and has made himself the most prominent symbol of – a violent insurrection that attempted to overthrow the United States Government on January 6, 2021,” the document reads.

The filing also states that Chansley left a note for Pence on the Senate dais that read, “It’s only a matter of time, justice is coming.”

“When questioned as to the meaning of that statement, Chansley went on a lengthy diatribe describing current and past United States political leaders as infiltrators, specifically naming Vice President Mike Pence, former President Barack Obama, former Senator Hillary Clinton and U.S. President-elect Joe Biden as infiltrators involved in various types of wrongdoing. Although he stated his note was not a threat, the Government strongly disagrees,” the filing explains.

Prosecutors further argue that Chansley should remain in custody due to his criminal record, belief in QAnon conspiracy theories and his avowed intent to return to Washington DC during Biden’s inauguration.

Officials highlighted that in speaking with FBI officials, Chansley expressed he would “for sure” want to attend protests in the nation’s capital. “I’d want to be there, as a protester, as a protester, f***in’ a,” he reportedly remarked.

Chansley is presently charged with a pair of felonies: obstructing the conduct of a law enforcement officer and obstructing an official proceeding. His next detention hearing is scheduled for Friday afternoon in Phoenix, Arizona.

In the wake of the deadly January 6 attack at the US Capitol, federal authorities have placed Washington DC on high alert over concerns that armed protests may unfold in the days ahead of Biden’s inauguration on January 20.

Earlier this week, the FBI issued a bulletin alerting authorities that a “huge uprising” was being planned as Trump loyalists eyed holding armed protests at the state capitols across the nation, including the now-shuttered US Capitol.

The initial bulletin detailed that Trump supporters would be holding an armed demonstration from January 16 through “at least” Inauguration Day, with protests being held at the US Capitol on January 17.

Additionally, it was later revealed that law enforcement officials had briefed congressional lawmakers on three potential attacks against the US Capitol, the White House and the Supreme Court. Reports suggested the attacks were planned with the intention to seize and occupy the government buildings.

During a Thursday meeting at the Federal Emergency Management Agency headquarters in Washington DC, FBI Director Christopher Wray remarked that the bureau was monitoring “extensive” online chatter about potential threats.

In an effort to double down on security measures, Wray stated that the agency would be working nonstop in coordination with its 56 field offices across the nation. “Our posture is aggressive, and it’s going to stay that way through the inauguration,” he said.

© REUTERS / Joshua Roberts
A member of the National Guard is given a weapon before Democrats begin debating one article of impeachment against U.S. President Donald Trump at the U.S. Capitol, in Washington, U.S., January 13, 2021.

In Washington DC, authorities have deployed thousands of National Guard troops, erected rows of fencing lined with barbed wire and implemented a series of roadblocks in anticipation of possible violence.

Authorities have warned local police across the nation to strengthen their security measures.

As the deadly January 6 riot unfolded and saw five people killed, including a Capitol Police officer who was beaten to death, severe scrutiny has fallen on US President Donald Trump after many blamed him for inciting an insurrection.

Moments before the storming took place, Trump and several speakers at the “Stop the Steal” rally on the White House lawn called on supporters to take action and not allow the election to be “stolen.” The repeated demands came as lawmakers held a joint session at the US Capitol to confirm the Electoral Vote.

It was as lawmakers began their first debate of the Arizona electoral vote won by Biden, that chaos unfolded and sent lawmakers into hiding, as hundreds of rioters broke past security barriers and ransacked the federal building.

The insurrection, which killed 5, continued for several hours before law enforcement officials began to regain control and push rioters away from the Capitol grounds; however, the damage was already done even after Trump issued a statement urging his supporters to leave.

© AP Photo / Jose Luis Magana
Supporters of President Donald Trump climb the west wall of the the US Capitol on Wednesday, Jan. 6, 2021, in Washington

As lawmakers returned to certify Biden as the next US president, officials began to voice support for removing Trump from office, either by invoking the 25th Amendment or by putting forth articles of impeachment.

Although the US House of Representatives passed its resolution to invoke the 25th Amendment on Tuesday, Pence stated that he would not support its use as, according to him, it would “set a terrible precedent.” However, the House chamber made history the following day after it impeached Trump a second time.

© AFP 2020 / Stefani Reynolds
The signed article of impeachment against President Donald Trump sits on a table at the U.S. Capitol on January 13, 2021 in Washington, DC. The House of Representatives voted to impeach Trump a second time, after Vice President Mike Pence declined to use the 25th amendment to remove him from office after protestors breached the U.S. Capitol last week.

While it was widely accepted that the House would easily pass the measure, it remains uncertain how the measure will be received in the Senate. Reports surfaced earlier this week that Senate Majority Leader Mitch McConnell (R-KY) was “pleased” with the Democrat’s impeachment, but seemed unlikely to take up the measure before Inauguration Day as McConnell said he would “almost certainly” not be convening lawmakers before then.

Despite being impeached for inciting an insurrection, Trump has rejected any claim that he bears responsibility for the events, telling reporters that his remarks at the rally were “totally appropriate.” He later indicated at an event that the historic second impeachment is a continuation of the “witch hunt” against him.